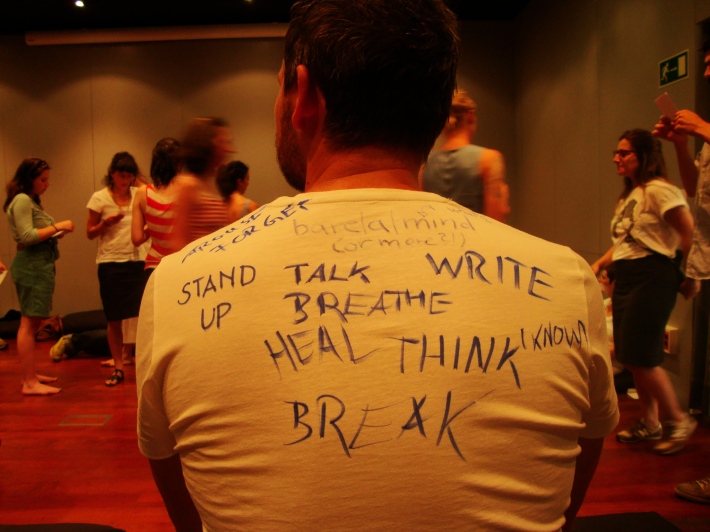 K: The New Epic Theater is a theater after the post dramatic theater.
It is influenced by the epic theater discourse,
and it aims to actualize it in – and with – the social reality of theater.
In this context we want to poetically frame our mission,
and we have about 30 minutes left before realizing our actual plan:
to spend time with you
dancing.

T: But this time doesn’t belong to us
not to me
not to you
not to us
not to them
it is unowned, abandoned.
it is No Man’s Time

K: Maybe we don’t want to own it
but use it instead
spend it
waste it
lose it

T: maybe even with each other
or together
like we do it now.

K: Later we will dance together
a sacrifice
le sacre du printemps

T: but this spring it won’t be another virgin that is killed,
but the central perspective instead
and choreography as image
we will sacrifice Tanztheater
and the self-contained community of performers
for the sake of the New Epic Theater.

K: When will we be able to decide what we can forget?
When may we forget to be able to decide?
Can we remember ever having taken a decision?
The voids of thoughts are one-way-streets, too.
The fear of deciding against (what?) pushes us further.

T: What has happened to the theater spaces?
Have they become like airports and train stations.
We arrive without expectation
Look at each other.
We are taken from nowhere to nowhere.
The rest remains fiction.
The gazes are all politeness.
Bodies
Projections.

K: The projections are kept, the bodies come and go, like in the pubs, the bus stop, everyday life.
We are not involved.
Everyday Pornography.
I see myself seeing. I see myself being seen. I remain polite.
We talk to the critics.
They always seem in a hurry.
They come from the airport.
They are always easy to spot.

T: So please, get the theatre spaces out of here!

K: But where to? Land taking seems to have failed.

T: Across the centuries the female subject learned to tragically fall silent in the drama.

K: Finish your phrase, Elektra, but shut up your mouth then.
Your death will give you a voice over the centuries. Your drama won’t have happened, but you will have been a voice in the time. The plot will be endlessly repeated. You will be a living dead. A flattered and flattering self cracks for a moment. Seduction with exit to uncertainty. In the immediate happenstance nothing is evoked. Nothing evokes. Break of a habit and suddenly something cuts itself into the everyday rhythm. What is left over are feelings of hurt, desire, pardon, despair, promise. Drama in the here and now, self conflict without solution.

K: «Thus, every living creature is striving for idleness. But, idleness is the motor and guarantee of work, because idleness can only be reached through or via work. Therefore, it is easy to understand, that before a curse of work came over the humans they remained in a state of idleness. In the original living together, maybe, this state really existed and it might be that the legend of the creation of the paradise and the expulsion of the human being out of it expresses exactly this blurry image of the past or a vision of the future, that the human being will reach because of the curse of work.»

T: Mutually we are faced with each other.
One sees oneself, one is seen by others.
In between nothing happens.
Practice is just another word for nothing left to do.
So lets build a theater by doing theater
not by enclosing space
or by enclosing ourselves
in useless self discovery

K: Everything still needs to be done,
and we need everybody who is available!

T: A theater that you can only understand
by making experiences in it.
No theater where you arrive to watch something.
Get involved in it, not with it.
Choreography for us
today
is no closed circuit, no readymade, no object,
no clever comment to an actuality
that is constructed by the media.
Choregraphy can be a complex landscape
with living people moving within it.
The resulting communal dance is the condition
of the New Epic Theater.

K: The transmission and communication
of dance is always at risk
as is its materiality in each living choreography.
A choreographic landscape always implies
its feasibility.
Dance is always also
embarrassing,
exposing what is not obvious
what is not self made
and what still remains to be done.

T: It is embarrassing
as it exposes deficits
and risks the order of what we believe in.

K: Choreography is a landscape of people.
And landscapes don’t develop progressively
They are there, they grow entropically
One has to walk through a landscape
in order to get to know it.
It is not enough to look at it on a map.

T: Choreography,
Landscape,
Text,
are all textures
woven fabrics.
Holes that are connected only with other holes
like our reality
like our genealogy
deficits, memories, ruptures, discourses.

K: This theater is a theater of social reality.
It communicates in the world with the world.

The time we spend together
can only be measured
in how it keeps us
going on
spending time
together
keep on
keep on, going on
knitting on.

T: … a dance that does no longer happen in-front of us
to be admired
but a dance that happens with all of us
that entangles us
all around us
that absorbs us

K: so we can experience
how we do
what we do
when we do it
today.

The event is the audience
And choreography can be directed to the areas of reality,
that are directly concerned with its application.
This is why we also sacrifice choreography as external form,
the performance as a creative idea of an artist, or choreographer, or dramaturge;
and even the performing as an acknowledgeable accomplishment of the dancers, or performers.

T: Because there is no choreographer, no dramaturge, no audience,
no performer
but choreography, dramaturgy, performance
as shared responsibilities
of everyone present.

Everything still needs to be done
Everything can still be discovered
In a few minutes we will all dance together.

K: The choreographic, the dramaturgic, the performative
can only emerge in a landscape with people,
not only with bodies.

T: Dear Audience, welcome to spend time!
You are welcome in this entropic ballet,
this anti-central,
anti democratic ballet.
It is not physical facts that are negotiated,
presented,
admired,
but shared concerns instead:
how we do,
what we do,
when we do it.

K: The practice of collaboration challenges
our work and life since 2001.

When we first met we said «hello» to each other,
and quite immediately «good bye» to who we were.

T: No more work of Kattrin Deufert and Thomas Plischke
but shared work of the artistwin deufert&plischke!
From now on we created work in collective collaboration.
An we always wanted this collaboration to extend our work,
to also infect and challenge our private life as couple
and others around us.
We became twins, and as lovers our relationship was an incest.
And we want to share this gentle misbehavior
with those we meet in life and work.

K: The mess we’re in in collaboration is also
not limited to the practices of creation or production.
When work is presented,
the collaboration extends to a larger social sphere.
And if we understand collaboration not only as unilateral cooperation of all performers,
then the activity of the viewer needs to be included
into the very idea and concept of each project.
In our work we claim that theater can no longer be
the place where we investigate
WHAT we can do,
or WHAT is the history of it,
even if it is true for the larger part
of theater and performance today.
The exploration of aesthetic and physical limitations
and transgressions has produced its own conventions
on contemporary form and provided its proper historic justification.
And in dance and performance both, form and historic reference
is heavily dominated by the western continental discourses
and aesthetics of american post modernism
and Judson Dance Theater.
This is our folklore.

T: Today we need to emancipate from both
aesthetic forms and historic justification
when it comes to performance and dance.

Emancipation means not to be in opposition or denial,
but only to claim that the here and now needs to be
as present as the past,
and not being completely determined and dominated by it.
The New Epic Theater takes the audience serious
by not doing theater for them, but with them.
Much like in the «Lehrstück» of Bertold Brecht
we want to activate the audience and include them
into the action, into the choreography.
But we don’t aim to bring the everyday on stage,
but rather everybody on stage!
The audience is our theater.
The audience makes our theater.
Everything still needs to be done,
and everybody is responsible for their doing.

K: Here comes the New Epic Theater:
the intertwining of theatrical reality,
situative collectivity and narrative documentation.
What is left after the event is the re-narration of personal perceptions and experiences of the event,
not its interpretation.
«In place of hermeneutics we need an erotics of art»
writes Susan Sonntag in «Against Interpretation» published 1963.

Instead of the public intellectual reflection,
which always already transforms the artwork
and shifts it towards the critical perspective of the interpreter, we need an opening,
a place where the artwork can risk its appearance
and demand participation.
Get involved in it, not with it!
Transgress the taboo that puts the artwork beyond reach
in the processes of creation,
production and presentation.

T: This is maybe the political dimension
of collaboration as mess,
as it directly asks for decision making
within a community of strangers.
This decision making process is always also about
the constitution of collectivity, of community,
of a group as a zone of expression,
not of control and set behavior.

My
mEmory
of whaT
Happened
is nOt
what happeneD

K: John Cage wrote this at the beginning of his
Composition in Retrospect.
So, be aware that everything you hear at this moment
is about to move away from you endlessly.
In the best case what happens will leave some vague traces
in your memory.

T: And this memory is not yours
and not ours

K: not yours and not mine

T: and maybe we don’t want to own it